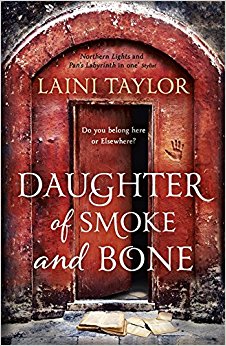 Around the world, black hand prints are appearing on doorways, scorched there by winged strangers who have crept through a slit in the sky. In a dark and dusty shop, a devil’s supply of human teeth grows dangerously low. And in the tangled lanes of Prague, a young art student is about to be caught up in a brutal otherworldly war.

Meet Karou. She fills her sketchbooks with monsters that may or may not be real, she’s prone to disappearing on mysterious "errands", she speaks many languages – not all of them human – and her bright blue hair actually grows out of her head that color. Who is she? That is the question that haunts her, and she’s about to find out.

When beautiful, haunted Akiva fixes fiery eyes on her in an alley in Marrakesh, the result is blood and starlight, secrets unveiled, and a star-crossed love whose roots drink deep of a violent past. But will Karou live to regret learning the truth about herself? -GR

I was really disappointed with how much I disliked this book because I was so sure I was going to love it. This is a book series beloved to so many people with similar reading tastes to me and so while I was reading, I was just waiting for the boom to hit me and I'd see what everyone was raving about.

But it just didn't… quite… happen.

I think my issue to begin with was with Karou. So many people love her but I just saw her as a bit of a Manic Pixie Dreamgirl™ and a little Mary Sue-ish. I love her confidence and independence but when she starts using magic and flying and is so beautiful and mysterious and everyone loves her… I couldn't really believe it. She doesn't seem to have any flaws. However, she was better than reading about a character with a bland personality. She was at least entertaining to read from, if a little unbelievable.

A redeeming feature of this book for me is the fact that it is about angels and demons without the religious aspect. I'm not a huge fan of religion in books unless its open for interpretation but there's no mention of God or no religious setting in this book so if you feel the same as me, don't worry.

I wasn't a huge fan of the plot. It was predictable but ultimately readable. I did love the setting of Prague, however. It's an amazing city from what I remember (I was young when I visited) and though I can't speak for how accurate it was, the atmosphere of the city in the book was so immersive.

I will be continuing with the series because I've heard it gets better and I really want to hop on the Laini Taylor bandwagon. Hopefully I'll enjoy the next book more!

One thought on “Daughter of Smoke and Bone by Laini Taylor”